Koh Tao is a Popular Place to see a Whaleshark

Tiny tropical Koh Tao packs a punch when it comes to scuba diver training and is commonly accepted to be the world’s number one destination to gain a diving certification.

There are many reasons why, not least because the training standards for divers are so high and also the low cost of obtaining a qualification.

Additionally, there are 30 easily accessible dive sites to choose from, a laid-back island lifestyle, diving all year round and the amazing underwater diversity.

With vibrant coral reefs and encrusted pinnacles, the waters around Koh Tao are home to a huge variety of colorful marine life, from small reef fish to larger pelagics and sea turtles.

The Most Spectacular Fish with regular sightings on Koh Tao is the Whaleshark.

Many of the visitors to Koh Tao who arrive to learn scuba diving or enjoy a snorkel trip, get excited about the possibility of a Whaleshark sighting whilst they are in the water.

Before we let you into the secret of the best time to see a Whaleshark, lets understand a little more about this amazing fish.

Underwater Habits of a Whaleshark

Whalesharks are primarily pelagic, but do not like to stay in deeper waters. They are capable of reaching depths of 1800m, then return to the surface to warm up and are rarely found in water below 21C.

A Whaleshark has very few known predators, but their choice to stay close to the surface leaves them vulnerable to a species that poses their biggest threat: humans.

Their large size and slow speed make them easy to hunt and despite being listed as an endangered species by the International Union for Conservation of Nature, there are areas where unregulated hunting occurs.

In addition to the threat from hunting, boats pose a significant risk. Whalesharks may have a thick skin, but a collision with a boat or accidental capture in fishing nets can cause serious injury.

As if humans didn’t already pose enough of a threat, the volume of plastic that has found its way into the oceans creates an additional hazard.

As Whalesharks are filter-feeders, it is very easy for the water that passes into their mouths to contain plastic.

Say No to Plastic

This plastic would be unlikely to pass out through their gills, and so would move into their digestive system, causing obstructions which lead to starvation.

The threat from humans is largely responsible for Whaleshark numbers falling by more than half in the last 75 years alone.

Despite the threat that humans pose to Whalesharks, they pose no threat to us and are known to be gentle, curious and even playful.

Their slow speed means they are accustomed to swimming alongside humans and younger Whalesharks have been known to play with the bubbles created when we scuba dive.

The Best Chance to see a Whaleshark around Koh Tao

It is possible for Whalesharks to be seen around Koh Tao at any time of year, but if you want to increase the likelihood of seeing one, you should visit Koh Tao between March and June or October and December.

The biggest chance of seeing a Whaleshark around Koh Tao falls between March and June, a time the local diving industry refers to as “Whaleshark season”.

The weather during these months is generally hot and dry, with little or no wind, creating optimum conditions for diving and great visibility.

If you aren’t a great fan of the hot weather, you will also have an increased chance of seeing them between October and December, when it will be cooler.

This does coincide with Koh Tao’s monsoon season and may be the reason for the increased sightings as the higher rainfall leads to more nutrients washing into the water.

The extra nutrients in the water creates lots of micro-algae, which attracts the Whalesharks.

The best locations to find Whalesharks are the areas where they gather to feed on fresh plankton that has been delivered by the underwater currents.

The best locations on Koh Tao to see a Whaleshark are Chumphon Pinnacle, Sail Rock and South West Pinnacle.

These dive sites are also hugely popular due to the variety of marine life that they are home to.

Best Dives sites to see a Whaleshark on Koh Tao

Additional dive sites that Whalesharks are seen at are Shark Island in the south, Hin Wong Pinnacle in the east, and Green Rock off the north west coast of Koh Nangyuan island.

If you are only just learning to dive, there have been many sightings at White Rock and Twins, which are dive sites used for the Open Water course, so you could be lucky and see one at these locations.

If you prefer snorkeling to scuba diving, it is still possible to see Whalesharks when the visibility is good, due to their preference for swimming close to the surface.

Shark Island is a good choice as it is accessible by kayak, but it is also possible to join a dive boat heading to one of the other locations.

Around Koh Tao, it is not uncommon for Whalesharks to be visible from the boat as they cruise along just under the surface.

If you plan to visit Koh Tao to learn to scuba dive or are planning a short trip to enjoy the viewpoints and snorkeling, there is always a chance the largest fish in the sea will grace you with their presence.

You can contact us for information regarding scuba diving, snorkeling or where to stay or what to do before you arrive. 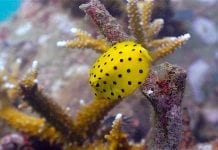 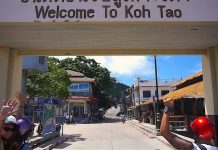 10 Tips to Rent a Scooter on Koh Tao 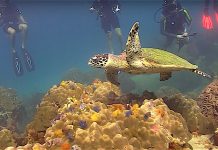 6 Reasons to do Open Water Course on Koh Tao 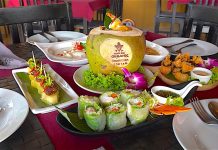 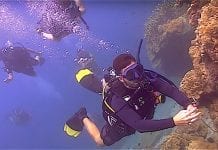 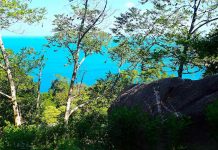 The dive sites around Koh Tao provide choice to scuba divers and the tropical location is known as the most popular place in the world to learn to scuba dive.

The Cost of a Hostel on Koh Tao

The Best time to see a Whaleshark on Koh Tao

ABOUT US
The Funky Turtle® provides travel tips, news and information for visitors to Koh Tao, including how to get here, where to stay and what to do when you arrive. You can follow us on social networks, leave a comment or send us a message direct.
Contact us: [email protected]
FOLLOW US
© Copyright 2022 - The Funky Turtle® • All rights reserved

How to get from Koh Samui to Koh Tao

How to get from Chumphon to Koh Tao